Song: “Round and Round,” by Ratt

By 1984, we’ve moved out of the apocalypse and that involves wearing a lot more clothes, because post-apocalyptic wastelands are known for being much hotter than your average mansion, even during a stuffy dinner party. Even when it’s hosted by (Ratt’s manager’s uncle) Milton Berle, and also Milton Berle in drag. 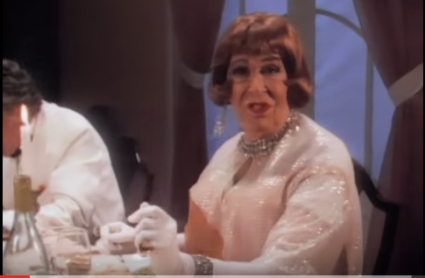 “Round and Round” is my favorite genre of song — the one that sounds like a love song but is really a celebratory anthem of the bromance between the band. See also: any Bon Jovi song. The video, however, is neither a love story nor a bromance, because when you’re a band named Ratt, the metaphors kind of just make themselves: 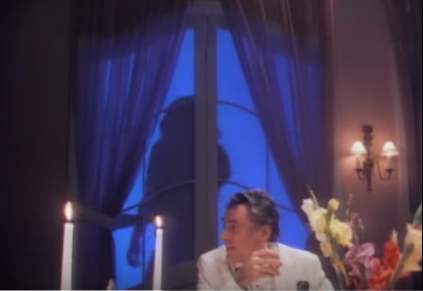 Though this song a cut from Out of the Cellar, the butler helps the Ratts sneak up to the attic where they start performing (insert yourthe butler did it joke here), much to the consternation of the fancy folks eating dinner, who mime their displeasure in a way that is totally natural to human communication:

They also mime a conversation about who’s going to go up and figure out what’s making that infernal racket. As though it’s going to be anyone but the hot one.

Now, the thing about this video that’s really intriguing isn’t the stunt casting, the fairly sophisticated plotting, or the fact that Stephen Pearcy seems to have been holding his pee since 1983.

I recently finished reading Pearcy’s autobiography, Sex, Drugs, Ratt & Roll: My Life in Rock (and Eschewing Serial Commas), and it’s a surprisingly compelling read in its lack of excuses or apology. I was looking forward to reading what he had to say about the “Round and Round” video and perhaps learning why he spends so much of the video staring at the floor.

Instead, he notes that video was on MTV so often he began to feel embarrassed because “I do a few too many awkward high-kicks to feel real good about it.” (There are only two but I applaud his self-awareness.)

Of course you do, Stephen, of course you do. Because what “Round and Round” highlights is how difficult it is to be the front man without an instrument. Bobby has his drums, and no one expects anything from the drummer. Robbin, Warren, and Juan have their guitars and bass, which allow for slick choreography.

No man is an island, Stephen shows us. And so that leads to moves like “maybe if I just mime playing guitar no one will notice” and, of course, the high kicks.

I feel you, Stephen. Not everyone has Paul Stanley’s dance ability or level of self-actualization. It’s hard out there for a frontman, when all eyes are on you and you have nothing to hide behind.

So anyway, the video moves into some complicated shenanigans in which the butler serves a plate of rats that are actually the Milton Berle characters transfigured but then the ceiling collapses and a Ratt also crashes onto the table. Then the attractive lady party guest pushes away from the table as they sing “I’ve had enough” because that’s the kind of attention to detail we can expect around here, and she sneaks up to the attic. And of course her dress falls off. THIS IS WHY WE AVOID ATTICS, LADIES.

We all know metal makes you dirty, but somehow, in this universe, it also makes you goth, which is pretty confusing, so instead of thinking too hard about it, the woman in question hops around like a bunny because maybe that’s what you do when you’re a rat person, the rules are kind of unclear. Then she unleashes some pretty slick dance moves, in all sincerity.

And then the butler turns goth too, because IDK, listening to Ratt makes you want to put on some black lipstick. It’s still only 1984, so there are a few kinks to iron out. 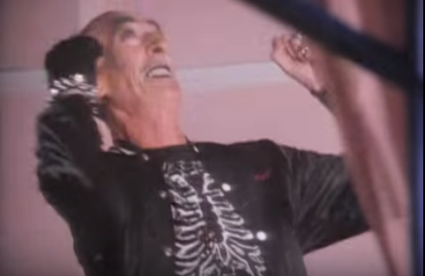 But as we’ll see as the years go on, there’s one kink that never gets ironed out, and that’s the quiet desperation of the frontman. We see you, buddy. We see you.

4 thoughts on “The Heart Is a Lonely Frontman”