Song: “Slow an’ Easy,” by Whitesnake

Yeah, yeah, Whitesnake isn’t really hair metal (a conversation that deeply confused a dear friend recently when she asked “which is better, Poison or Whitesnake?”), but David Coverdale has a magnificent head of hair and “Here I Go Again” has become genre iconography. And before Tawny, there was the accidentally feminist genius “Slow an’ Easy.”

“Accidentally feminist?” you ask. “You do realize you are talking about a band that has given the world lyrics such as ‘spit it out if you don’t like it’ and ‘slide it in right to the top‘, right?” And I do. I do. But stick with me.

But wait! There’s something on the ground. Closing in, it’s revealed to be a…pearl necklace.

And then there’s an awesomely timed cut from black and white to color, and I’m not even joking because as tongue in cheek as I can get, I love this shit. And also David Coverdale is wearing a necktie, so that’s cool.

So there’s this woman driving. Presumably the one who crashed her car. And she’s wearing a pearl necklace that…appears…to…be…strangling her. Well. Okay. Necklaces get tight sometimes.

But then we cut back to that image a couple times (between shots of the sultry John Sykes and Neil Murray, embracing his role as the One Really Happy Band Member). And as it tightens around her neck, well, maybe it’s just because I’m in writer school, but boy that sure seems to be a metaphor.

Before we can get fully entrenched in that, though, we’ve got the a capella-ish chorus featuring, of course, band members clapping. You know what’s a surefire way to never raise the question about whether or not band members can clap in unison? Never show them in the same frame. Whitesnake’s been around since 1978, y’all. This isn’t their first rodeo.

(Can we also address the fact that if David St. Hubbins and a non-threatening Ted Nugent had a baby, the resulting child would not look unlike John Sykes?) 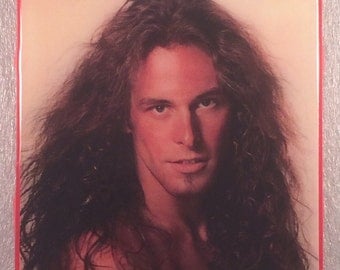 MOVING ON. Flashback! The woman in question donning a super sweet cape and David Coverdale upsetting a tower of Coke cans. Because America, probably.

And then even flashbackier flashback (I’m assuming this is before and that he gets mad because she puts on her cape and leaves): he gives her the pearl necklace. Listen. I didn’t make the video. I’m just writing about it.

So David finds the necklace and the wrecked car and he’s sad, like I wouldn’t have knocked down the cola tower if I knew this was going to happen. But then an identical car drives up and he approaches the window, necklace in hand. And here’s the twist. She looks at him with a look I am going to be practicing in front of the mirror for days and we can see the marks the necklace has left on her neck and we realize the wreckage is her former, stifled self and she’s just like, “Know what, Dave? I’m all set,” and drives away. Because she cannot be constrained by a pearl necklace.

And yes, you could ask what other kinds of writing I’m avoiding by spilling nearly 700 words on an extended sexual metaphor and pretty gross slang term, and I’d probably stick my fingers in my ears and run away. But I’m all about finding female empowerment in a genre of music that is often (and not unfairly) critiqued for its misogyny. So here’s to you, caped lady, for not letting a dude keep you down. And here’s to you, Whitesnake, for this likely accidental message and this super sweet power stance:

Stay tuned for next time, where I in no way, shape, or form try to convince you of underlying feminist meaning in the Scorpions’ “Rock You Like a Hurricane.”

One thought on “Pearls Before Swine”